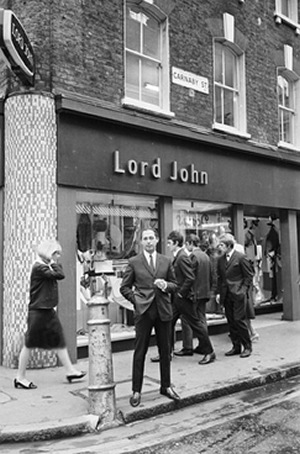 The Big Red Building, which is Gold’s Menswear has a unique history. Unusually for today, it remains a family business with a long tradition in tailoring and Menswear retailing. Founded by Warren Gold, the business is now run by his son Jamie and a staff of experienced and well versed individuals.

Warren Gold was one of the pioneers of the fashion revolution in menswear that took place in the 1960s. Together with his brother David he opened his first Lord John shop in Carnaby Street in 1964 from where in just a few years they built it into the first ever national and international chain of modern fashion menswear outlets. They not only took Lord John to all the major cities in the UK, but also to Europe and to the USA. With Lord John, Warren also created the first retail brand in fashion menswear, “Lord John of Carnaby Street.”

In his persona as Lord John, Warren was a prominent member of the 60s and 70s London scene along side his equally famous customers, The Beatles, The Rolling Stones, Tom Jones, , The Kinks, Donovan, Engelbert Humperdink, Peter Noone of Herman’s Hermits, The Small Faces and very many others of the day. Warren, his Lord John shops and his ever changing innovative designs were rarely out of the fashion pages of the newspapers and magazines. Both leading manufacturers and retailers from around the world would come to Carnaby Street just to try to emulate the Lord John look in their own ranges and stores.

At a very early age Warren discovered that he had a particular interest in and flair for fashion. These factors, combined with his innate design skills, the influence of his father’s menswear retail experience and an instilled philosophy of always providing good value, good service and quality merchandise, injected originality and personality into the somewhat stale menswear industry. 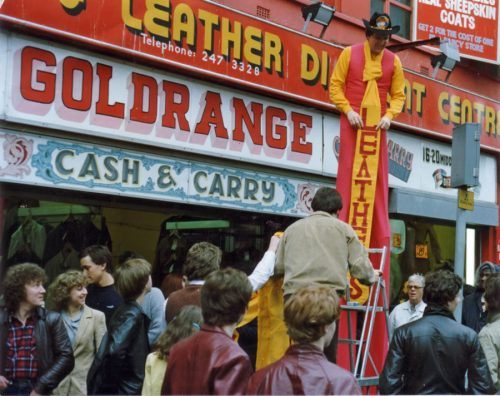 Later, after he sold the business to a public company, he again found himself in the role of pioneer retailer. Well before anyone else, again with his brother David, he opened the first ever men’s clothing factory outlet store. It was called Goldrange and was famously known throughout London via a vigorous radio advertising campaign as ‘The Big Red Building in Petticoat Lane’.
Today, The Big Red Building is in Golders Green Road where with his 50 years of unequalled knowledge and experience Warren has created a unique store and shopping experience. At any one time Gold’s menswear can carry some 5000 designer label and branded garments in stock in a huge variety of sizes, up to 72” chest and 62” waist. With a choice of a multitude of styles and colours it is virtually impossible for any man not to find the perfect style and fitting. Despite the vast array of styles and sizes the philosophy of the business remains the same; good value, good service and good quality.

Services Parking
Read more
Measuring Chart Size Guide
Read more
Alteration Services
Read more
The Perfect Fit for Wider Feet
Read more
We use cookies on our website to give you the most relevant experience by remembering your preferences and repeat visits. By clicking “Accept All”, you consent to the use of ALL the cookies. However, you may visit "Cookie Settings" to provide a controlled consent.
Cookie SettingsReject AllAccept All
Manage consent

This website uses cookies to improve your experience while you navigate through the website. Out of these, the cookies that are categorized as necessary are stored on your browser as they are essential for the working of basic functionalities of the website. We also use third-party cookies that help us analyze and understand how you use this website. These cookies will be stored in your browser only with your consent. You also have the option to opt-out of these cookies. But opting out of some of these cookies may affect your browsing experience.
Necessary Always Enabled
Necessary cookies are absolutely essential for the website to function properly. These cookies ensure basic functionalities and security features of the website, anonymously.
Functional
Functional cookies help to perform certain functionalities like sharing the content of the website on social media platforms, collect feedbacks, and other third-party features.
Performance
Performance cookies are used to understand and analyze the key performance indexes of the website which helps in delivering a better user experience for the visitors.
Analytics
Analytical cookies are used to understand how visitors interact with the website. These cookies help provide information on metrics the number of visitors, bounce rate, traffic source, etc.
Advertisement
Advertisement cookies are used to provide visitors with relevant ads and marketing campaigns. These cookies track visitors across websites and collect information to provide customized ads.
Others
Other uncategorized cookies are those that are being analyzed and have not been classified into a category as yet.
SAVE & ACCEPT